Posted on July 19, 2011 by popgoestheclassroom

Learning by Playing: Video Games in the Classroom 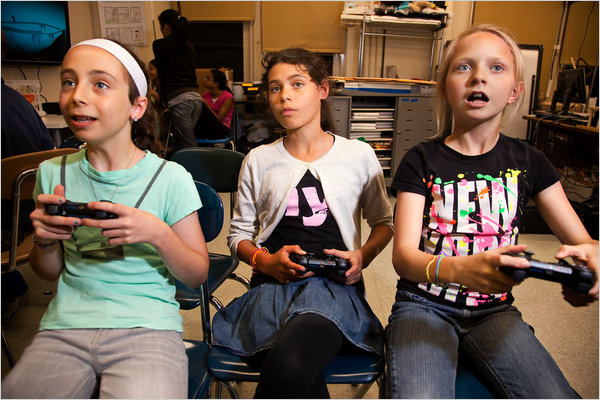 One morning last winter I watched a middle-school teacher named Al Doyle give a lesson, though not your typical lesson. This was New York City, a noncharter public school in an old building on a nondescript street near Gramercy Park, inside an ordinary room that looked a lot like all the other rooms around it, with fluorescent lights and linoleum floors and steam-driven radiators that hissed and clanked endlessly.

Screen Test A Sports for the Mind class. Instead of grades, students receive report cards with levels of expertise like ‘‘novice’’ and ‘‘master.’’

Doyle was, at 54, a veteran teacher and had logged 32 years in schools all over Manhattan, where he primarily taught art and computer graphics. In the school, which was called Quest to Learn, he was teaching a class, Sports for the Mind, which every student attended three times a week. It was described in a jargony flourish on the school’s Web site as “a primary space of practice attuned to new media literacies, which are multimodal and multicultural, operating as they do within specific contexts for specific purposes.” What it was, really, was a class in technology and game design.

The lesson that day was on enemy movement, and the enemy was a dastardly collection of spiky-headed robots roving inside a computer game. The students — a pack of about 20 boisterous sixth graders — were meant to observe how the robots moved, then chart any patterns they saw on pieces of graph paper. Later in the class period, working on laptops, they would design their own games. For the moment, though, they were spectators.

Doyle, who is thin and gray-haired with a neatly trimmed goatee, sat at a desk in the center of the room, his eyeglasses perched low on his nose, his fingers frenetically tapping the keyboard of a MacBook. The laptop was connected to a wall-mounted interactive whiteboard, giving the students who were sprawled on the floor in front of it an excellent view of his computer screen. Which was a good thing, because at least as they saw it, Doyle was going to die an embarrassing death without their help. Doyle had 60 seconds to steer a little bubble-shaped sprite — a toddling avatar dressed in a royal blue cape and matching helmet — through a two-dimensional maze without bumping into the proliferating robots. In order to win, he would need to gobble up some number of yellow reward points, Pac-Man style.

Beauchamp, a round-faced boy wearing a dark sweatshirt, watched Doyle backtrack to snap up more points and calmly offered a piece of advice. “That extra movement cost you some precious time, Al,” he said, sounding almost professorial. “There are more points up there than what you need to finish.”

“How much time do I have?” Doyle asked.

“Thanks,” said Doyle, his eyes not leaving the screen. He added, “See, us older people, we don’t have the peripheral vision to check the time because we didn’t grow up with these games.”

For a few seconds, it was quiet. Doyle pinged through a row of reward points and then, hitting a little cul-de-sac in the maze, he paused. His avatar’s tiny yellow feet pedaled uselessly against a wall. The students began to yowl. A girl named Shianne pressed her hand to her forehead in faux anguish.

“Go! Go! Turn around. Don’t slow down. What are you waiting for?” someone called out.

“How much time do I have left?”

Doyle smiled. “All the time in the world,” he said, before taking his sprite on a deliberate detour to get even more reward points. The move, like a premature touchdown dance, put his students in agony.

And as the clock wound down and the students hollered and the steam radiator in the corner let out another long hiss, Doyle’s little blue self rounded a final corner, waited out a passing robot and charged into the goal at the end of the maze with less than two seconds to spare. This caused a microriot in the classroom. Cheers erupted. Fists pumped. A few kids lay back on the floor as if knocked out by the drama. Several made notes on their graph paper. Doyle leaned back in his chair. Had he taught anything? Had they learned anything? It depended, really, on how you wanted to think about teaching and learning.

WHAT IF TEACHERS GAVE UP the vestiges of their educational past, threw away the worksheets, burned the canon and reconfigured the foundation upon which a century of learning has been built? What if we blurred the lines between academic subjects and reimagined the typical American classroom so that, at least in theory, it came to resemble a typical American living room or a child’s bedroom or even a child’s pocket, circa 2010 — if, in other words, the slipstream of broadband and always-on technology that fuels our world became the source and organizing principle of our children’s learning? What if, instead of seeing school the way we’ve known it, we saw it for what our children dreamed it might be: a big, delicious video game?

Continue the Article at the New York Times.com